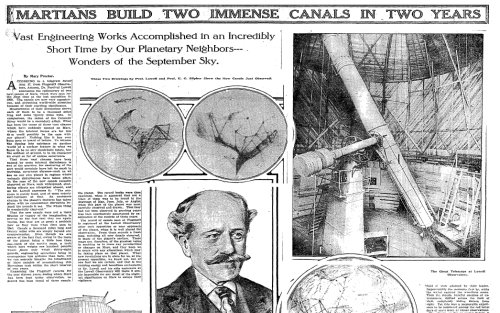 On August 27th, 1911 the New York Times Sunday magazine ran an article entitled “Martians Build Two Immense Canals In Two Years”. Astronomer Percival Lowell had been studying the Red Planet and sketched what he saw, in this case, a growing complex of apparent canals on the Martian surface. There was even a nice little story that went along with this canal-building alien civilization theory. Lowell said, “The whole thing is wonderfully clear-cut,” that the Martian civilization was dying and they were building canals to reach the water ice in the Martian poles.

It turns out he was right about the water ice, but there’s no trace of this canal-building race on Mars… in fact there’s little trace of anything biological on the Red Planet. So apart from a few historic anecdotes, there’s still no life on Mars. The search continues.

Canals a thousand miles long and twenty miles wide are simply beyond our comprehension. Even though we are aware of the fact that … a rock which here weighs one hundred pounds would there only weigh thirty-eight pounds, engineering operations being in consequence less arduous than here, yet we can scarcely imagine the inhabitants of Mars capable of accomplishing this Herculean task within the short interval of two years. — Excerpt from the 1911 New York Times article.

2 thoughts on “In 1911, Martians Were Building Canals”