I love this video.

Dara O’Brian, Irish comedian, says it the way it is, and as Phil Plait said, “I sometimes think that comedians wield more skeptical leverage than bloggers.” This is true, but it’s up to us bloggers to post cool snippets from skeptical comedian sets and have a good giggle. So here’s the hilarious O’Brian, slamming crackpots across the board (beware the NSFW language): 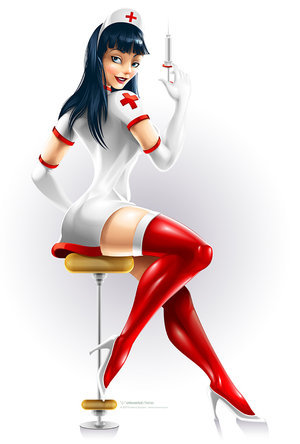 NOTE: This post is a little light on the space science, but keep reading, you’ll see why I’m making such a big thing out of my trip to the doctors…

Yesterday was supposed to be a very productive blog-writing day, however, like all good plans, the day didn’t turn out the way I’d hoped.

For a start, I heard news about a wildfire on my doorstep (it started literally a few hundred metres from my house, and I was only alerted to this fact via Twitter – I wondered what all those helicopters were doing), which prompted me to run outside looking for an ominous smokestack, only to find I was an hour too late and the blaze had been put out by the superb LAFD.

Then I had to play babysitter to Astroengine.com’s server in the hope I was going to get hit by a flood of Digg traffic some… time… soon…

Then I had to let the rabbits out for a run. Barney felt the need to stick his head in the pool, so I decamped my office into the garden so I could make sure he didn’t decide to take a swim. Oh, there’s a lizard! She’s massive! Where’s my camera?

Then I had to run to the bank.

Oh yes, then I had to get to my appointment at the docs to have my tetanus vaccine booster.

Of all the things I hate in the world, syringes come a frightening third after slugs and tall buildings (don’t ask, just look up batophobia). However, these are phobias. If I start using logic and seriously consider all the scary stuff that could happen to me, I’d be most reluctant to become horribly sick and be responsible for infecting others with a nasty, preventable illness.

Hence the vaccine. And the achy arm.

I actually have a strange love for doctors surgeries, as soon as I walk through those doors, I hand all responsibility for my body to the specialists in white white and blue coats. If anything health-wise should happen, at least I have a team that can diagnose me and hopefully repair me. Yes, bad things happen in medical centres, but I’d much rather take my chances with highly professional individuals with years of training and a huge stack of qualifications, than leave things “to chance”.

So there I was sitting in the waiting room, trying to stay calm as I saw the nurse fill up the syringe with fluid from a tiny vial.

Naturally, I started chatting to try to distract myself from thinking too much about the jab. “Do you get many people not wanting to take vaccines?” I asked the nurse.

“Well, there’s this growing anti-vaccination movement I’ve read so much about,” I said, a little surprised she appeared to be genuinely surprised by the notion. “Some celebrities have taken it upon themselves to spread misinformation about the link between vaccines and the onset of autism in children.”

“I heard about that,” she said, realizing what I was nervously talking about while staring at the needle in her hands. “But they are crazy, right? I mean, since when did they know anything about medicine?”

As it turns out, the only complaint she’d heard from parents about the need to vaccinate their children is the cost, but even then there are options for financial help.

When I left the medical centre with a sore arm, I felt a little different than I had done in the past.

When getting my vaccinations in the UK, it was always a routine affair that required no thought, it was just one of those things you needed to function in society. It’s one of those things I had to do. Looking at my medical records, I received my first vaccine when I was a baby and throughout my life I’ve had regular shots (or as I call them “jabs” which my Mrs Astroengine finds highly amusing). I can quite safely say that I will never catch mumps, measles, rubella, hepatitis and a whole host of other nasties, because my immune system has been bolstered by a history of vaccinations.

Many life-threatening diseases have been wiped out by the widespread use of vaccines, leading to some misinformed individuals to believe vaccines are no longer needed (on the contrary). Then there’s the misplaced (and completely wrong) notion that vaccines are somehow linked with childhood autism. This is a topic that is as insane as it is bewildering, and what’s worse, Los Angeles has become a hothouse of stupid celebrities who think they have every right to be peddling their belief that parents should not vaccinate their kids.

Having seen Jenny McCarthy on the TV a LOT (no red carpet is safe from her Christian Diors), I’m quickly realising the media has a lot of sympathy for her views about the connection between autism and the MMR vaccine. Unfortunately, this makes her extremely vocal in my neck of the woods, and many of her anti-science remarks blend in with her celebritydom, so her message is very well polished, and very… reasonable. People listen to her, and when hubby Jim Carrey wades in with his crazy take of reality on the biggest blogging platforms, even more parents start to think twice about their choice to protect their children against deadly viruses.

If all of this is news to you I urge you to read up on it via Phil Plait’s Bad Astronomy. Phil has been bringing this topic up a lot, and at first I wondered what all the fuss was about. Then I had conversations with neighbours and family and many of them are concerned about Jenny et al.’s views on the topic. Fortunately, they all have the common sense to talk to a medical professional before making any rash decisions about boycotting vaccines. Their concerns were laid to rest by the GPs, nurses and healthcare professionals who don’t have the celebrity soap box so many of the famous are using for their personal crusades. So we need more professionals and scientists like Phil who actually know what they are talking about.

Science is a collection of facts, not a collection of personal opinions and beliefs, a notion many people don’t seem to understand. And judging by the density of palm-readers and psychics in my neighbourhood, there’s a lot of people who choose belief of the paranormal over logic.

So, when I walked away from the medical centre, marvelling at the protective injection I had just received (a little bit proud about how I didn’t pass out at the sight of the needle), I felt sad for the kids out there whose parents deemed it necessary to listen to the idiocy spewing from the plumped lips of an ex-Playboy model. Those children could become ill due to negligence (it is parental negligence), and there are an increasing number of deaths associated with diseases that were once unheard of in modern society.

I don’t have children, but when I do, I’ll make sure I’d read up on all the scientific facts first, but they will certainly be vaccinated. For me, vaccines are imperative for “herd immunity” and essential for a healthy society. Individuals who are un-vaccinated could easily become carriers of deadly diseases. In my eyes, an un-vaccinated child could be viewed as a potential weapon. If they are immunized at an early age, their bodies have the ability to fight off contagious disease, preventing unnecessary suffering and, ultimately, improve the health of society as a whole.

So why did I bother to go off-piste and discuss my concern about antivaxxers?

We live in a revolutionary age for mankind. We are exploring space, we have unbelievable technology, we are processing data at a faster rate than ever before. We communicate globally. Medical technology is helping us live for longer than ever before. We are stronger and more intelligent. On paper, mankind is doing pretty well. Yes, there are massive issues challenging us (climate change, economic crises, disasters, overpopulation etc.), but never before have we been able to confront these problems so well. If we had infinite resources and a strong political direction, the Universe could be our oyster.

But as with the antivax movement, anti-science and religious interference with science could undermine our very existence on this planet. Imagine a future where we have constructed a low-Earth orbit infrastructure, sending probes into deep space; we have quantum computing and fusion power. And yet a large portion of the “developed” world distrusts science at its core. Every year there’s a doomsday prophecy. Despite all the scientific evidence against, classrooms are teaching evolution along-side “intelligent design”. Some kids think the Universe is 6,000 years old, others know it is in fact 13.73 billion years old.

And then there’s the Jenny McCarthy’s of this world, spreading nonsense about why we should fear immunization. The media eats that stuff for breakfast, can you imagine what the media could be eating for dinner in a decade? The physical health of entire nations could be put in jeopardy. Who can advance mankind when borders are closed and our brightest minds are dying because of a pandemic caused by a mutated strain of a virus that should have been controlled decades ago?

Having fought a pitched battle with 2012 doomsday advocates for the last year, I’m seeing a pattern emerge. Anti-science is rocking the foundations of mankind, and if you don’t believe me, you need to spend some more time on the internet (a medium by which everyone has a voice, no matter how insane). For every science website, there’s ten websites with pseudo-science ramblings. Unfortunately, now that bigger entities are finding new and inventive ways to make money from people’s fear, I get the feeling we’ve seen nothing yet…

So, that was my big day of getting vaccinated. Interestingly, the most profound moment came at the medical centre as I was leaving with a Band Aid on my arm. The nurse who injected me, obviously thinking about what we were talking about in the waiting room said something very interesting. She asked me why people thought there was some elevated risk associated with vaccinations, after all, all medication carries some kind of “risk” (but the probability of anything bad happening is very, very small). As researched by my friend Greg Fish, these “toxins” don’t sound half as bad if you understand exactly what those scary-sounding ingredients actually are, and in what quantities they are administered.

“Do these people have any idea how many toxins they breathe in every day?” the nurse asked as I walked out the door, referring to McCarthy and Carrey. Pointing at the traffic outside she added, “LA isn’t exactly known for it’s clean air!”

I'm at peace when I make friends with inquisitive koi.
So... this happened. 😀 @teslamotors #tesla #teslamodel3
"Get your kicks"
"No experience needed"
This beautifully meaty moth, probably the size of a small hummingbird, zoomed into my porch, banged into my head, said hi and then hung out on the window frame. I think we're now friends. His name is Brian. #moth #whitelinedsphinxmoth #insects #macrophotography #socalinsects
Why hello there, beautiful Mars rover ❤ . . . . #Mars2020 #nasa #jpl #nasajpl #mars #daremightythings #robot #marsrover #cleanroom